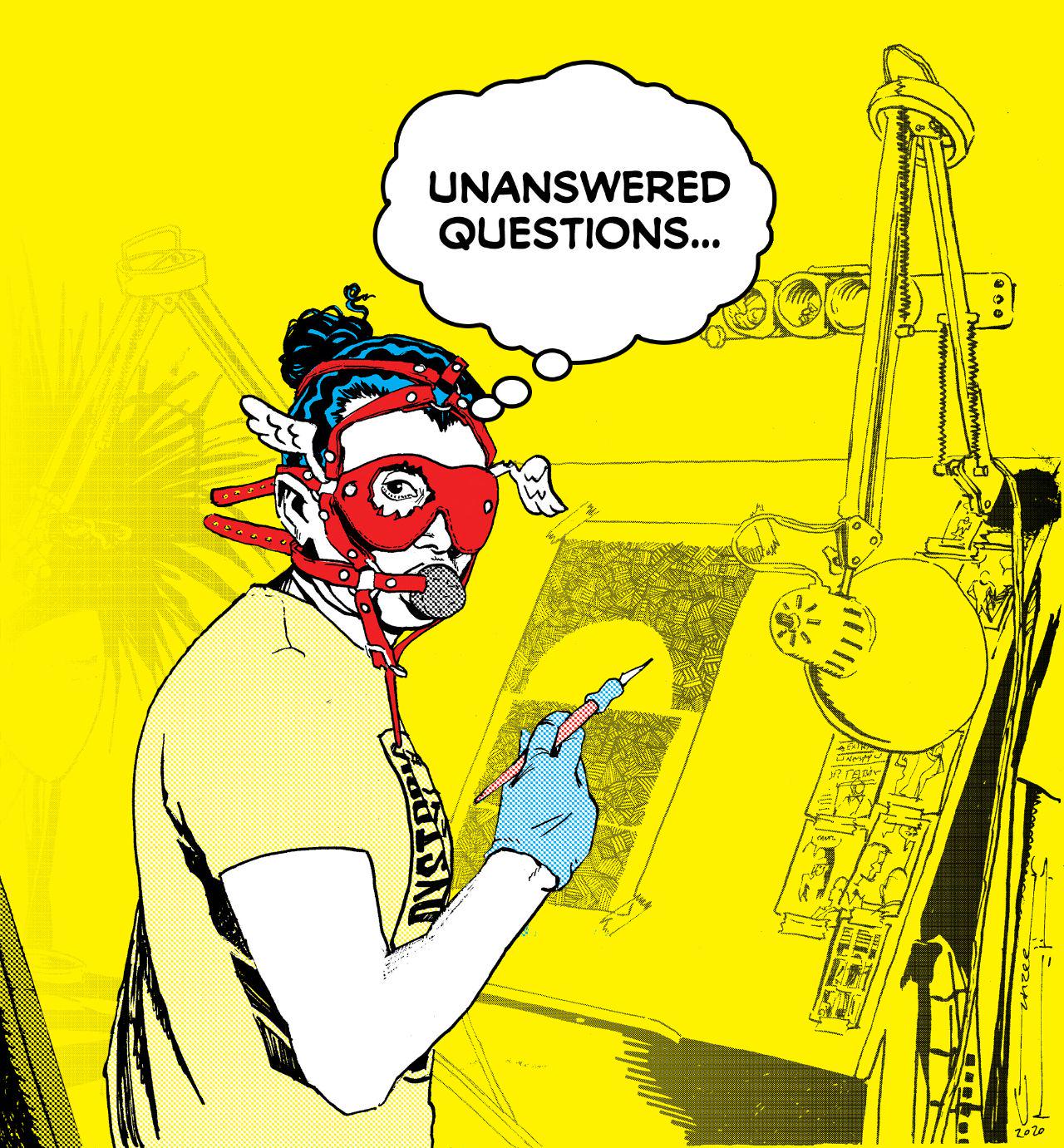 I've been getting quite a bit of praise about my OSU/Cartoon-Library talk, so I guess that went well! There were however a number of questions for the Q&A portion that went unanswered due to lack of time, but the folks at OSU sent me a log of questions asked, so I'ma attempt to address them here (although I'm not entirely sure this will be read by those who had the questions).

I'm assuming this is in reference to the paper that published the damning feature on the “Egyptian Protest Manual”. If I remember correctly, it was Akhbar El-Youm. Sometime between Jan 29-31 (2011), I don't fully recall.

2) Do you see your work as an extension or follow on from other Egyptian comic artists like Magdy El Shafee?

As much as I dig Magdy's work as well as that of the rest of my kinfolk, I don't think so. I think it's fair to say that THE SOLAR GRID is very different. I mean, it certainly draws from a ton of influences, but I think the end result is a soup that isn't easily identifiable by any singular flavor.

3) Lovely way to remember those folks. Does the color scheme mean anything?

I'm assuming this is in regards to the “Martyr Murals”. I think the yellow was meant to reference gold, but y'know... the pop equivalent if you will. My intention was to turn them into icons. This, in my mind, meant simple lines and bold, primary colors.

4) Could you talk about any influence Kickstarter had on being able to create and publish your book? Has it been picked up by a publisher? Any thoughts / views on Kickstarter in general around the freedom to create a book “your way” or anything of the like.

Well, it's been “picked up” by Radix Media which itself is running a Kickstarter to publish their editions. Of course, when people say “picked up by a publisher”, they usually mean a big name publisher that'll make the product widely available in the market, and that doesn't quite apply to Radix Media, which is comprised of four people who aren't just administrators but also print-makers who actively handle all aspects of printing and binding the books themselves. So, super intimate, super personal, very small scale, but I like that.

Of course, any author would like for their work to be made available as widely as possible, and that certainly includes myself, but far more important than wide availability to me is complete creative control and ownership, and most publishers don't quite allow that. Even if they're not the type to actively interfere, you as an author are likely to mold your work in a certain way so it fits their catalogue prior to even submitting it, and that is still a type of control, even if not outwardly overt.

I firmly believe that as a artist/author/creator I should be able to create what I want how and when I please, but the only way to make that a reality is to carve out a path for yourself that entails seizing as much of the means of production as possible. Hence: self publishing and/or co-publishing arrangements (with the right entities).

This becomes even more pronounced with more mainstreamish publishers flocking to crowdfunding platforms to fund their production, so the idea of “well if they're doing that, why don't I just do it myself?” is going to nag even harder, especially if you have enough expertise to pull it off. Granted, building enough of an audience is bound to be even more of an uphill battle, but it's a battle worth fighting.

Also, the creative concerns in regards to making comix and graphic novels don't solely entail the stories, artwork, and content, but also include things like production, formats, distribution and so on. So if you really want to make serious breakthroughs in the field (which is sorely needed if you ask me), becoming a publisher/creator is the only way. Crowdfunding platforms such as Kickstarter certainly make it far easier than before.

5) Thank you for this wonderful talk, Ganzeer. I’m wondering if you draw any inspiration from past illustrators working for Egyptian periodicals like Ruz al-Yusuf and Akhir Saʿa? I would also love to hear your thoughts on mahraganat as a means of protest in present day Egypt. Alf shukr!

Ruz al-Yusuf and Akhir Sa'a, not so much. But I used to pick up a ton of old printed matter from Sur Al-Asbakeya back in the day; defunct, heavily illustrated publications that date back to Egypt's 20's and 30's, as well as translated collections of olden American and Japanese comix, and of course things like painted Egyptian film posters (something I'm dying to riff off actually). There were also plenty of English-language publications I picked up, be they American comicbooks, design and architecture mags, or novels.

As far as Mahraganat music goes, I find that it is only “protest” in regards to its sound and aesthetic which for sure goes against the mainstream. Its content, not so much. In fact, I find it to be hugely misogynist. But perhaps the overt sexual innuendos can be considered a kind of social protest, but I'm not so sure it goes against the grain enough. Inventive sound though, that's for sure. Like Punk Rock back in the day, only far more insane.

6) How long have you been in the States? Are you planning on becoming a citizen so you can directly participate in the future of the country? Also, how can we find the Ganzeer?

Six years and counting. And yes. Everything “the Ganzeer” can be found on Ganzeer.com ¯_(ツ)_/¯

7) This looks fantastic. Will it be B&W or partly in color or completely?

Assuming this is in reference to THE SOLAR GRID, only partly in color, namely the off-world scenes. The stuff that is set on Earth takes up the majority of the book though, so it's largely B&W. So, the choice of when to use color and when not to is a purely creative decision informed first and foremost by the narrative—as opposed to, y'know, “the market” or “industry standards” or any of that stuff.

8) When will the Solar Grid be published?

A monthly serialized edition is coming from Radix Media beginning April 2021, with each installment running in the 40-page range. Towards the end of 2021, I'll be self-publishing a collected hardback.

The only paperback version will be Radix Media's serialization.

9) To what extent do you pre plan each sequence in terms of the illustrations’ composition?

I plan a lot. I do miniature sketches of all my sequences in a small 9 x 14.5 cm (3.5 x 5.5 in) sketchbook (a process called “thumbnailing”). So I basically have a miniature version of my entire chapter before working on the actual-sized version (Which is drawn on 28 x 43 cm—or 11 x 17 in—bristol board). Some changes are made in the process, but it's still good to have that miniature version as a guide. As an example, here's the entire thumbnail sketches for Chapter 4.

10) Will you still be collaborating with Ramy Essam in the future?

Oh yeah. Ramy and I connect on so many levels that over the course of the few days we spent together in New York earlier in the year, we found ourselves coming up with ideas that entail publishing, theater, and more. 🤞

11) Which graphic novelists and comics artists are you reading? Are there particular artists or genres that inspired the way that you created The Solar Grid?

I'm interested in a wide variety of stuff, and it's always changing. These days I'm primarily reading LONE WOLF AND CUB (by Kazuo Koike and Goseki Kojima), PINKO JOE (by Christopher Sperandio), and re-reading WATCHMEN (by Alan Moore and Dave Gibbons). Every once in a while I'll find myself flipping through SHARAZ-DE (by Sergio Toppi), STRANGE DAYS (by Peter Milligan, Brendan McCarthy, and Brett Ewins), DYLAN DOG (by Sclavi and various) and a few books by Druillet, Caza, and Simonson.

12) I noticed you've also done various bookcovers (like Watermelon Democracy). Are you only focused on political titles?

Not necessarily. It just so happens that those are the kind of gigs that are offered to me now. Happy to do book covers for any genre or subject matter, as long as I vibe with it.

13) Are you using “traditional” artistic methods, or is your art created completely digitally?

All traditional; pencil and ink on paper. Except for lettering (and colors when needed), that's done digitally.

14) Does that mean you'll sell original pages of art?

Yup. However, I'm not so keen on selling pages individually. I'll likely only be offering complete chapters in bulk.

15) Did you leave relatives behind? And are they ok?