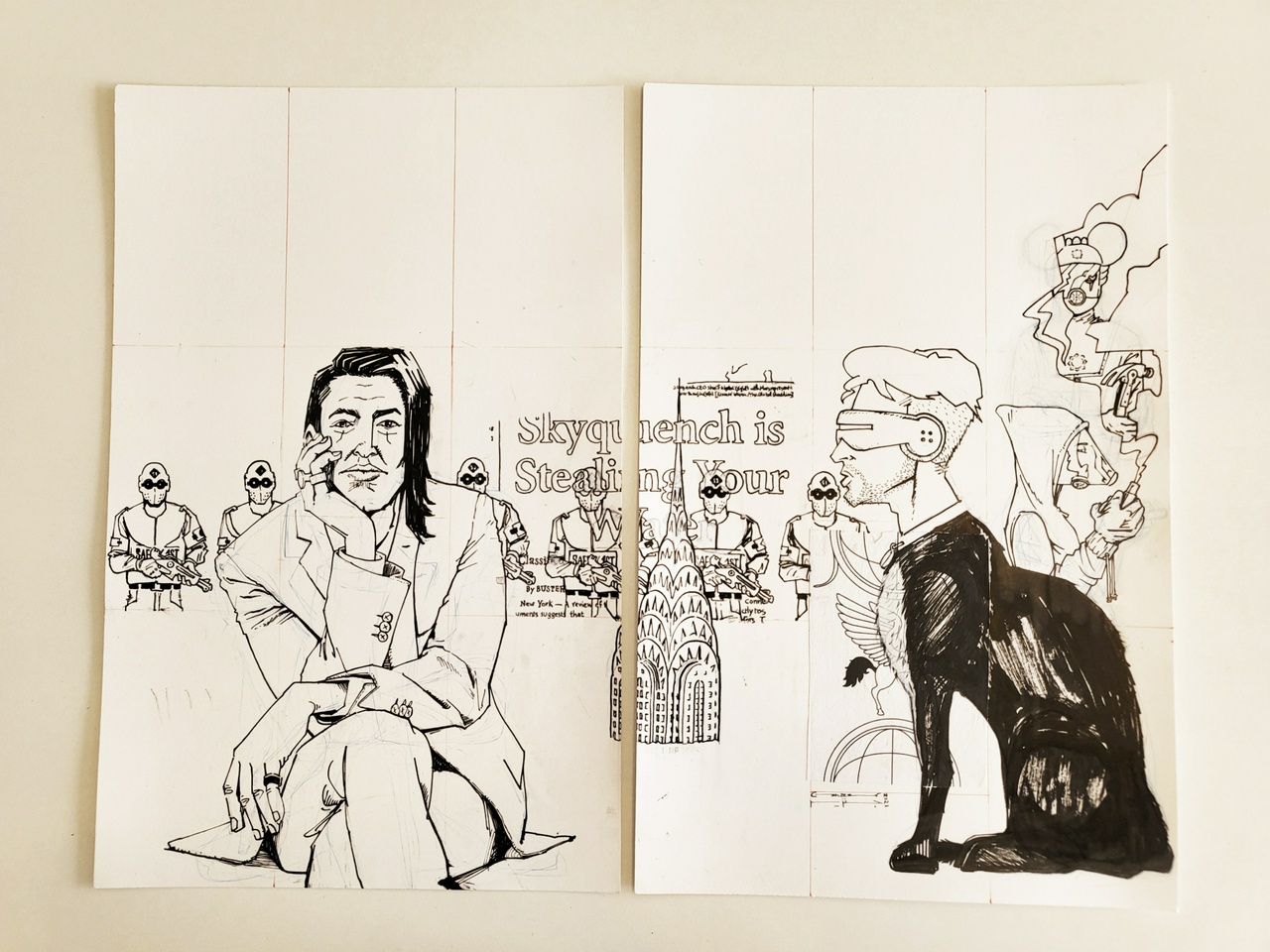 The composition of the entire thing is very much informed by the underlying grid I have in place, which gives the entire wraparound cover its balance, with room for the “cover dress” anticipated from the get go, since it was actually “designed” before I even conceived of any of the cover art (see posts from Aug 30, 2020 and Sep. 1, 20202).

I will happily employ digital aids where necessary, while relying on traditional techniques where it matters, and I think it shows with how I approached this cover art. 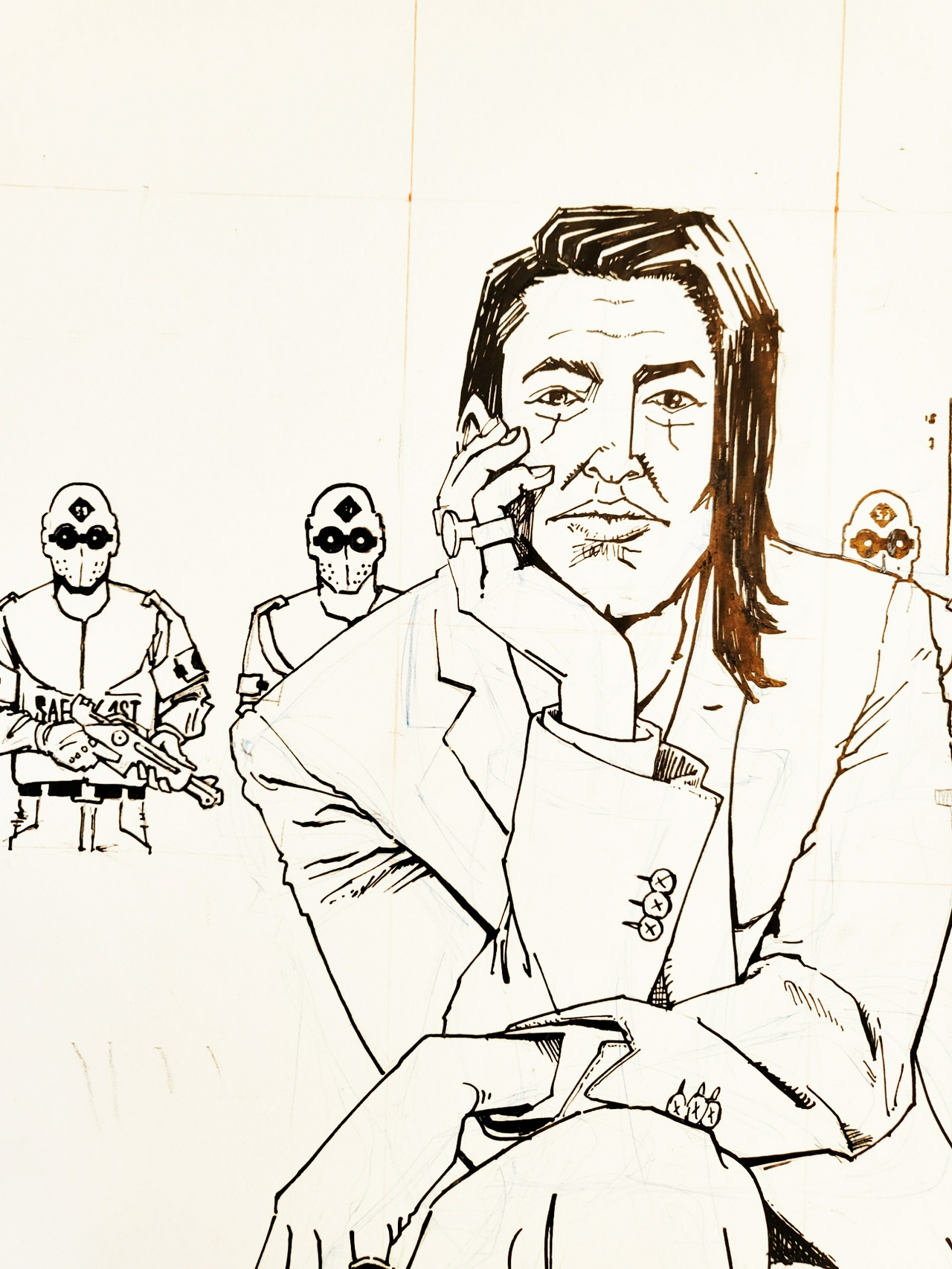 Take for example the Safety First guys lined up behind Sharif Algebri. Poses all identical, could have drawn just the one and copied and pasted the rest in photoshop, but I knew the small unintentional variations in lineart would lend a kind of quiet dynamism to the final illustration, which I felt would be necessary for what is ostensibly a very “still” cover. 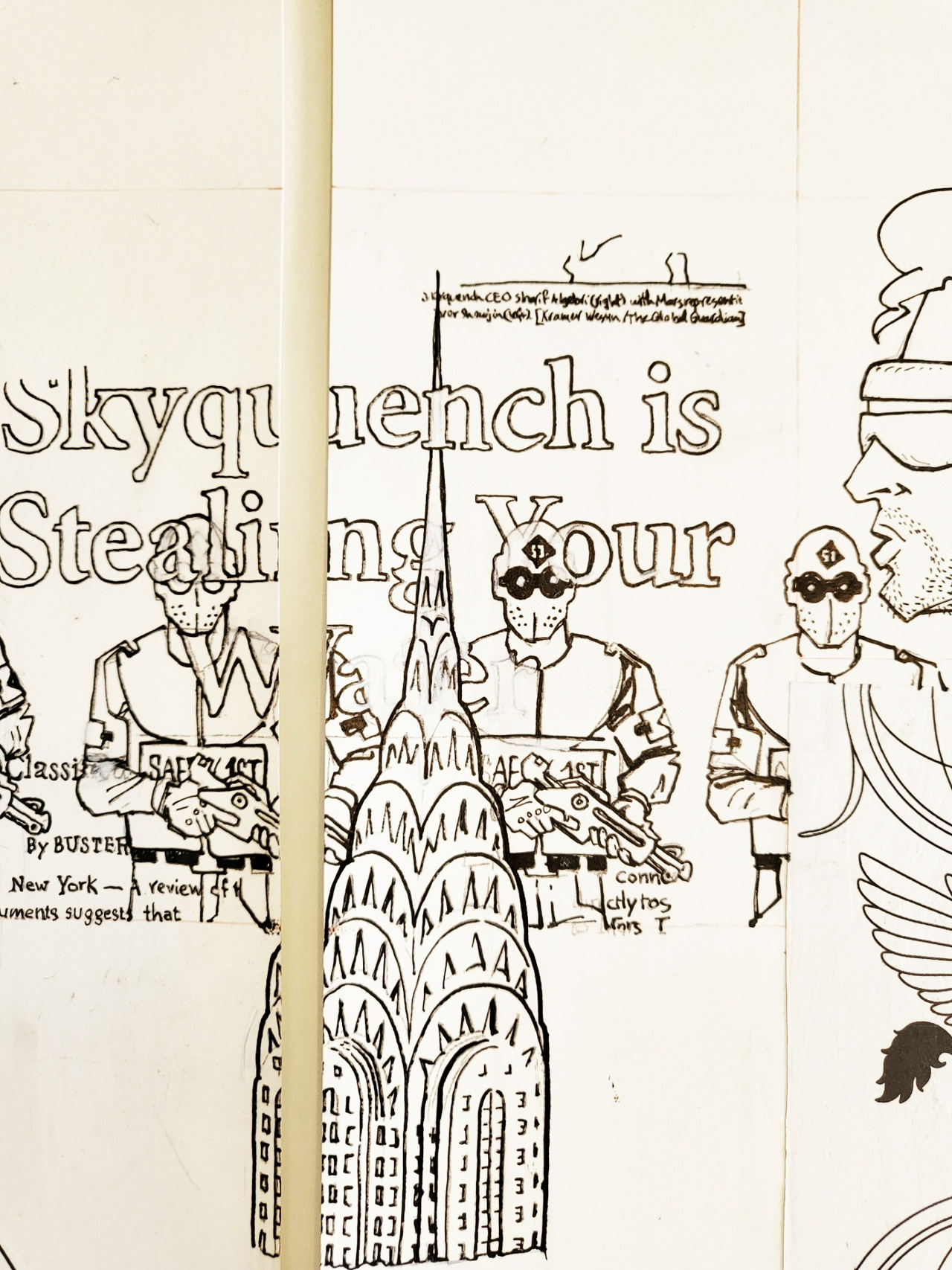 The newspaper text that kinda blends in with the lineart there. Again, another thing that would've been a real time-saver to do on my computer, but... if you look at the printed cover, you'll notice that bit of text sits rather closeish to all the “proper” typography of the cover dress. 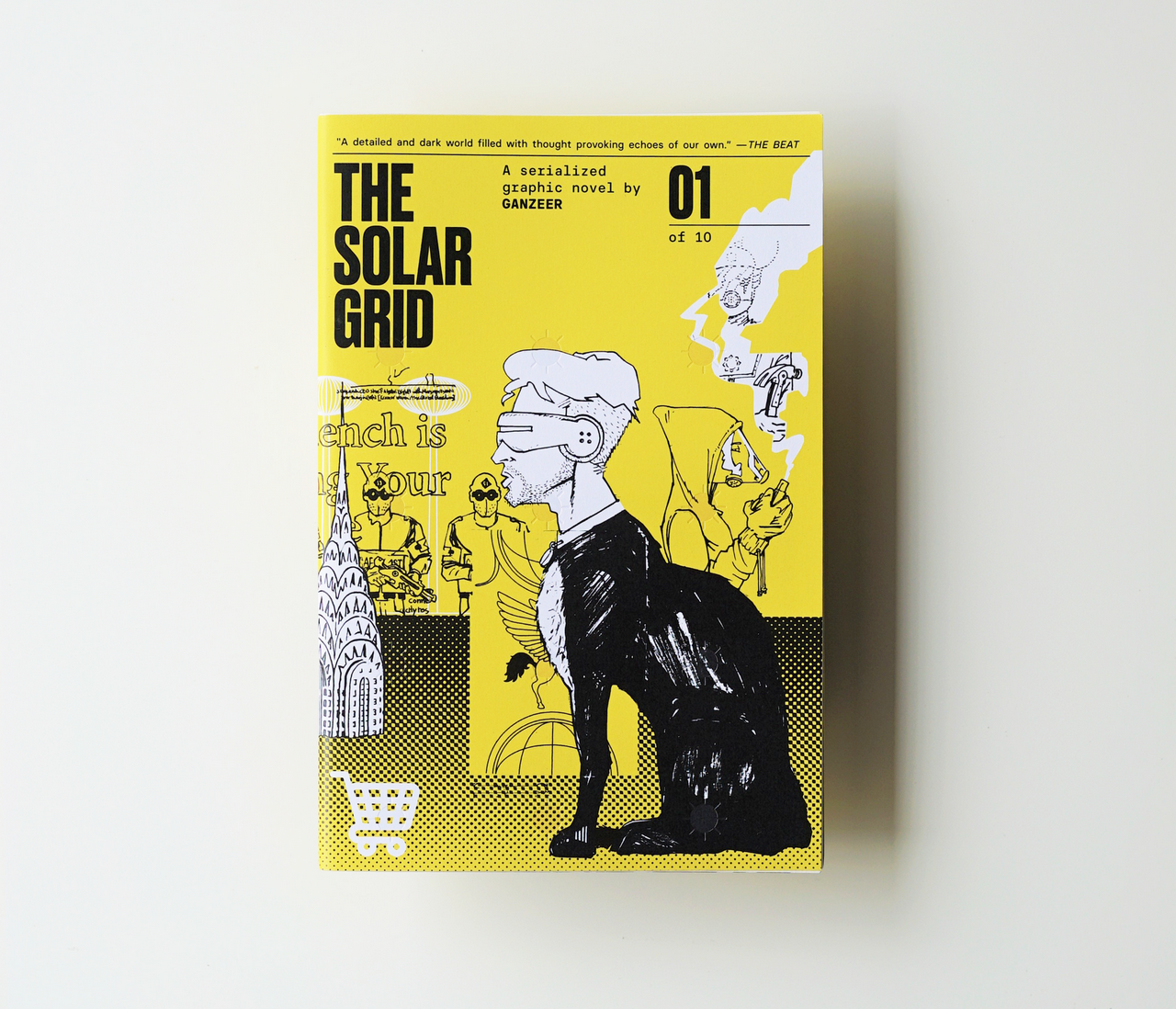 A good way to differentiate the cover dress's typography from any other typography is to employ an entirely different “medium” in its creation, hence opting to go the hand-drawn-with-ink-on-paper route for the typographic elements that are essentially part of the cover illustration. 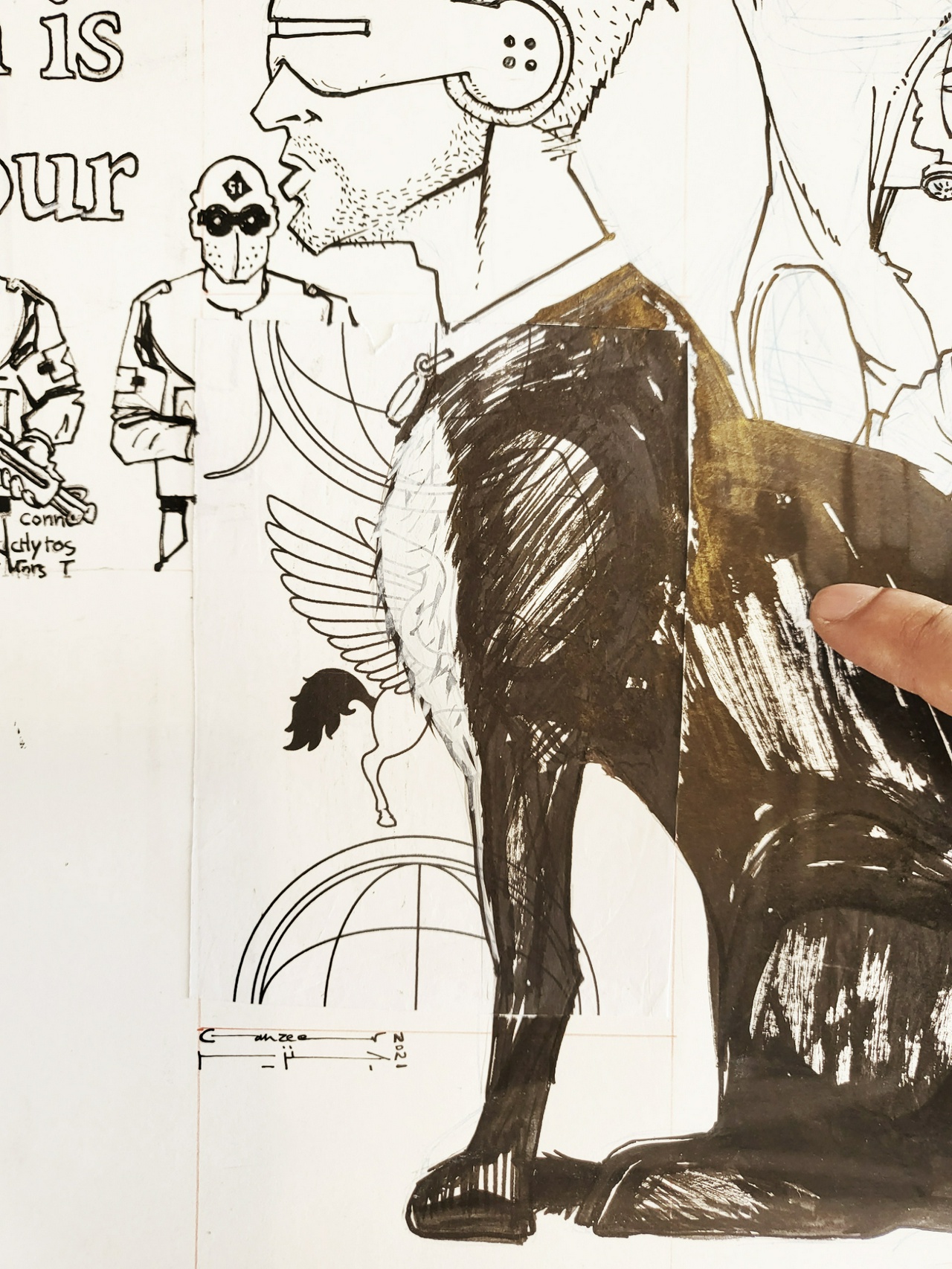 For the poster behind the feline figure, I decided to go ahead and print a miniature poster and paste it right on the board. This to give it a real pasted-up feel, which you can see affected the mark-making around its edges. And also, you see the little bits of poster illustration that are coming through the ink strokes for the cat fur? You can't see it so clearly in the final printed product, but you do see something, and it almost makes you want to scratch it off to see what's under. It's an effect you can't quite draw with any intentionality, and is purely the result of analogue “collaging”. 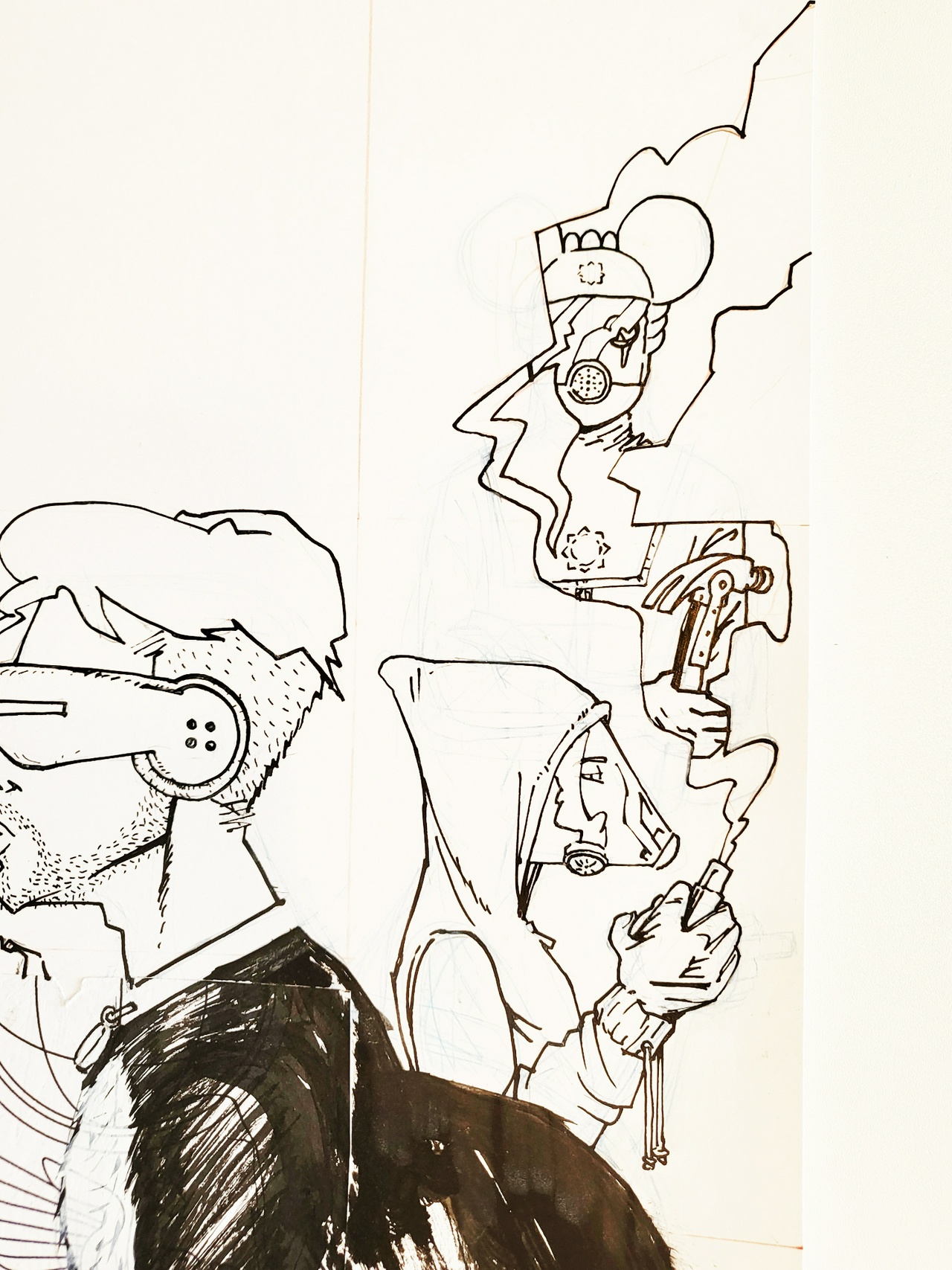 The fade on Mehret within the gun smoke was done digitally, because digitally does it better.

Same for the benday gradient taking up the bottom half of the cover and the shopping cart icon on the bottom left-hand corner of the front cover. As well as the Skyquench towers behind Algebri because they needed to be extra clean, accurate, and identical, like contemporary architectural blueprints. And also white, all of which Adobe Illustrator does better than analog. 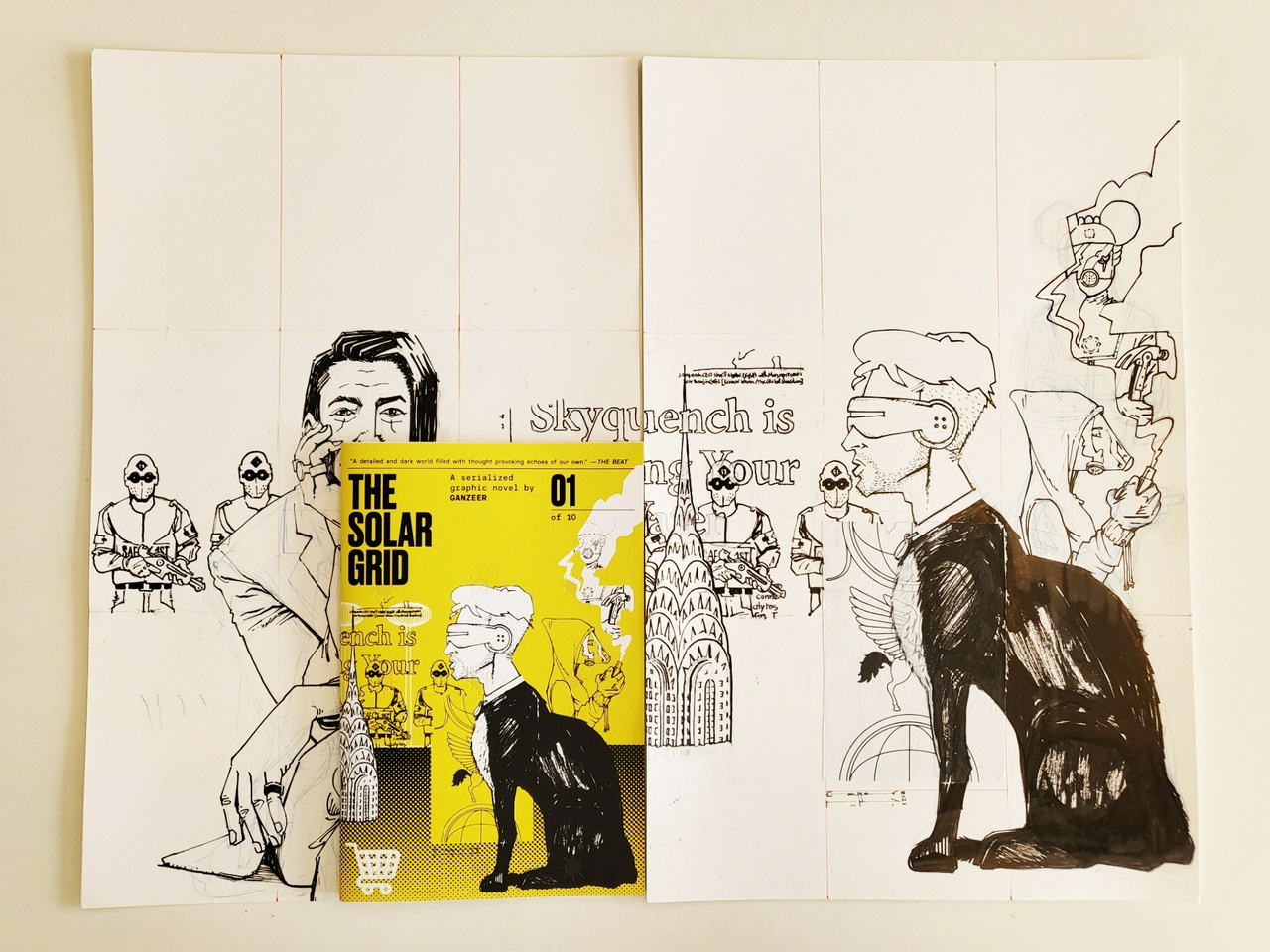 Here are the boards compared to the final printed product. 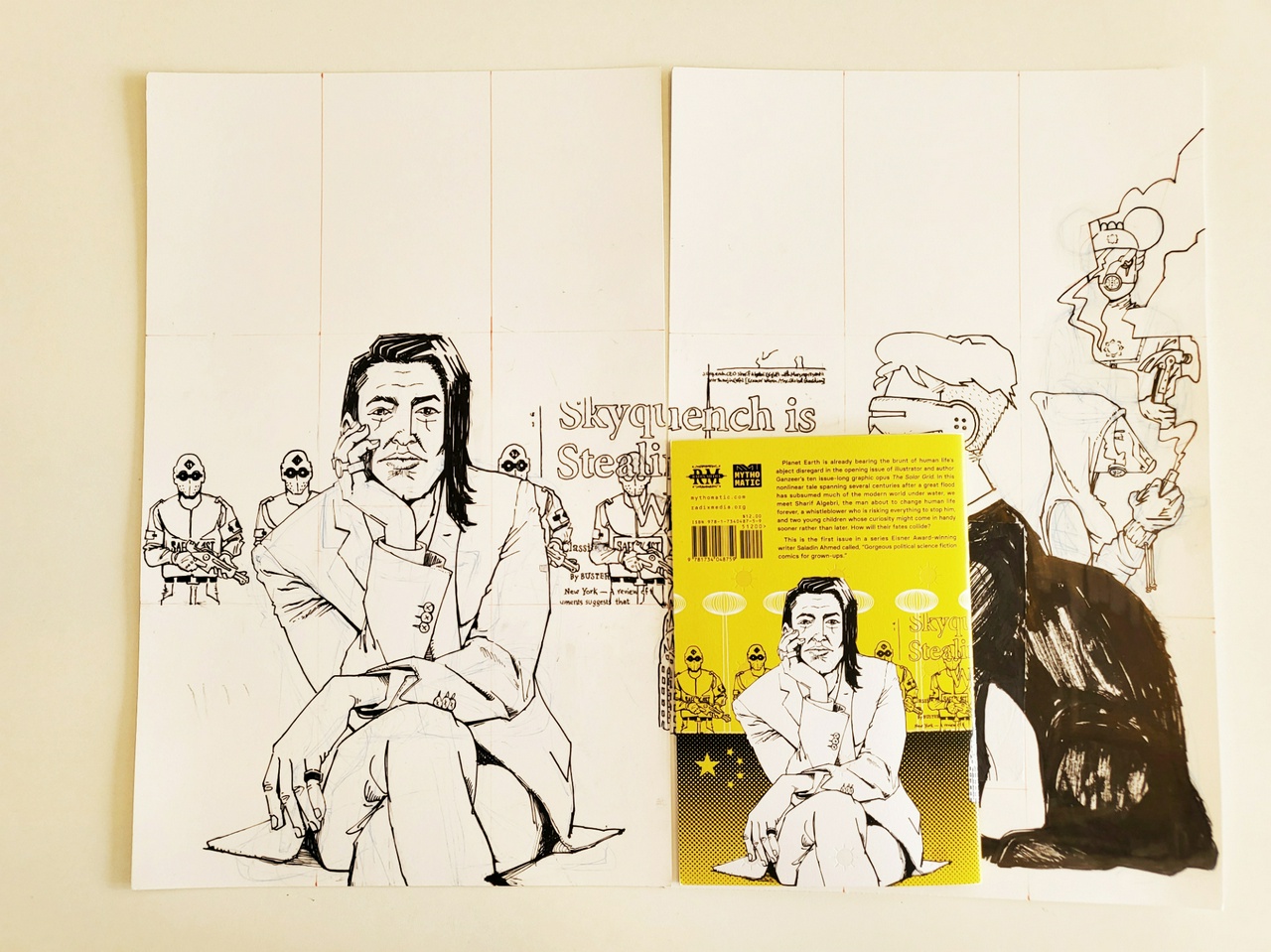 I draw on 11”x17” Bristol Boards, but the comix themselves are printed at 6”x9”, smaller than the traditional comic but I've always imagined it that way. Makes for a handier, more intimate read, and not out of place with most other books of fiction on the shelf, with 6'x9' being the most common standard. Both the level of detail in the art as well as amount of text per page account for this size difference.