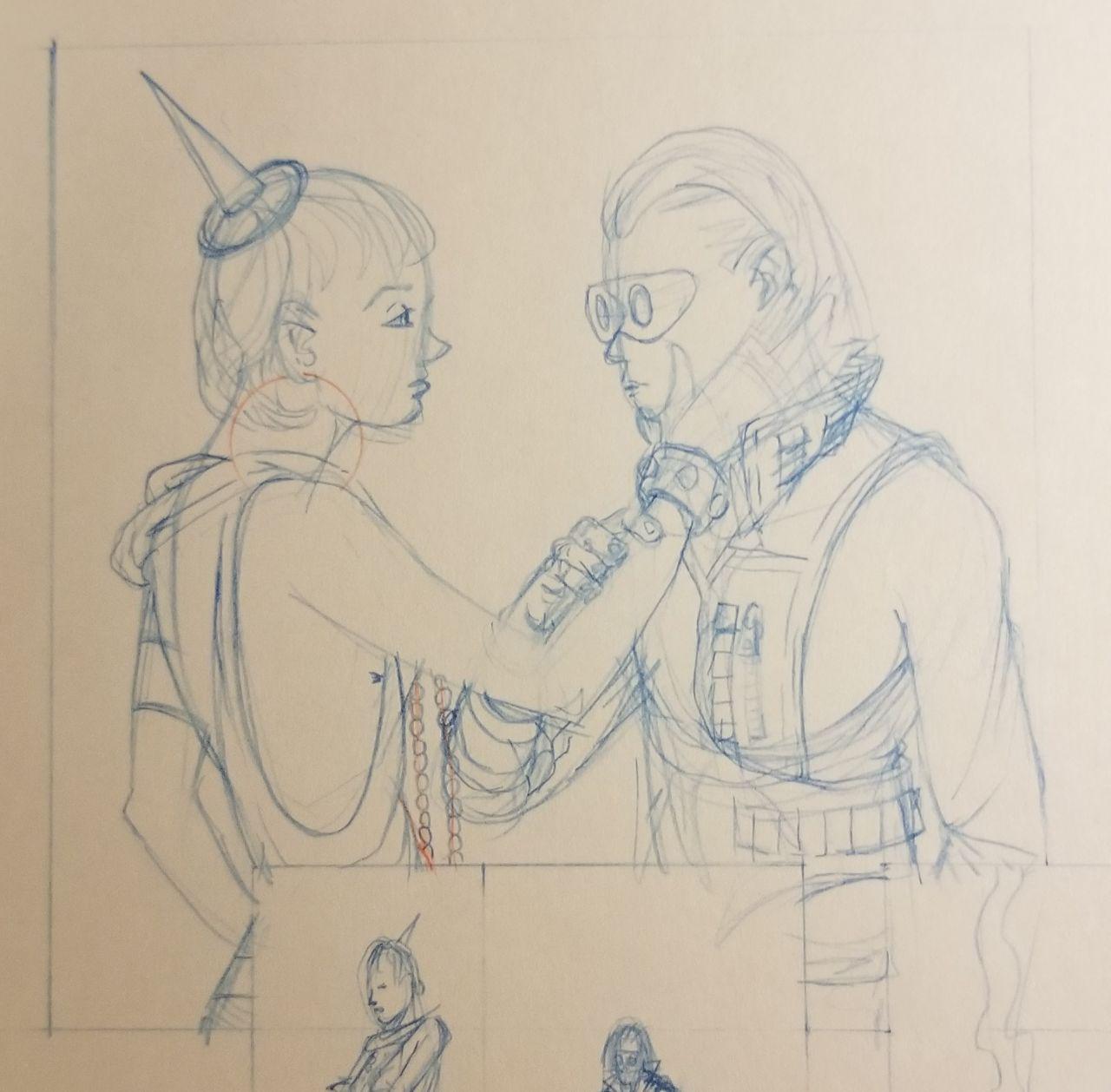 Two pages, fully penciled by 9:00PM. Not bad considering I started a little late today, at noon. Had I started at 9:00 in the morning, wouldda been done by 6:00.

I've read a lot of how-to books on comix. Stan Lee and John Buscema's HOW TO DRAW COMICS THE MARVEL WAY my old man got me when I was... maybe 14-15?

Eisner's COMICS AND SEQUENTIAL ART several years later when I was in college, along with McCloud's UNDERSTANDING COMICS, and probably a bunch of reads along the way. All very good books that deal with the craft of making comix, but I've read nothing—absolutely nothing—on what it takes to actually bring a comicbook out into the world.

Enter Dave Sim's CEREBUS GUIDE TO SELF-PUBLISHING which I only scored a handful of days ago. It's full of gems! Take this bit on time management for example:

It's an odd psychological trick that really does save you a shit ton of time. Oh the number of pages I'd attempted to solve the difficult parts on first, pages that would take up an entire week to finish. Stupid, stupid. 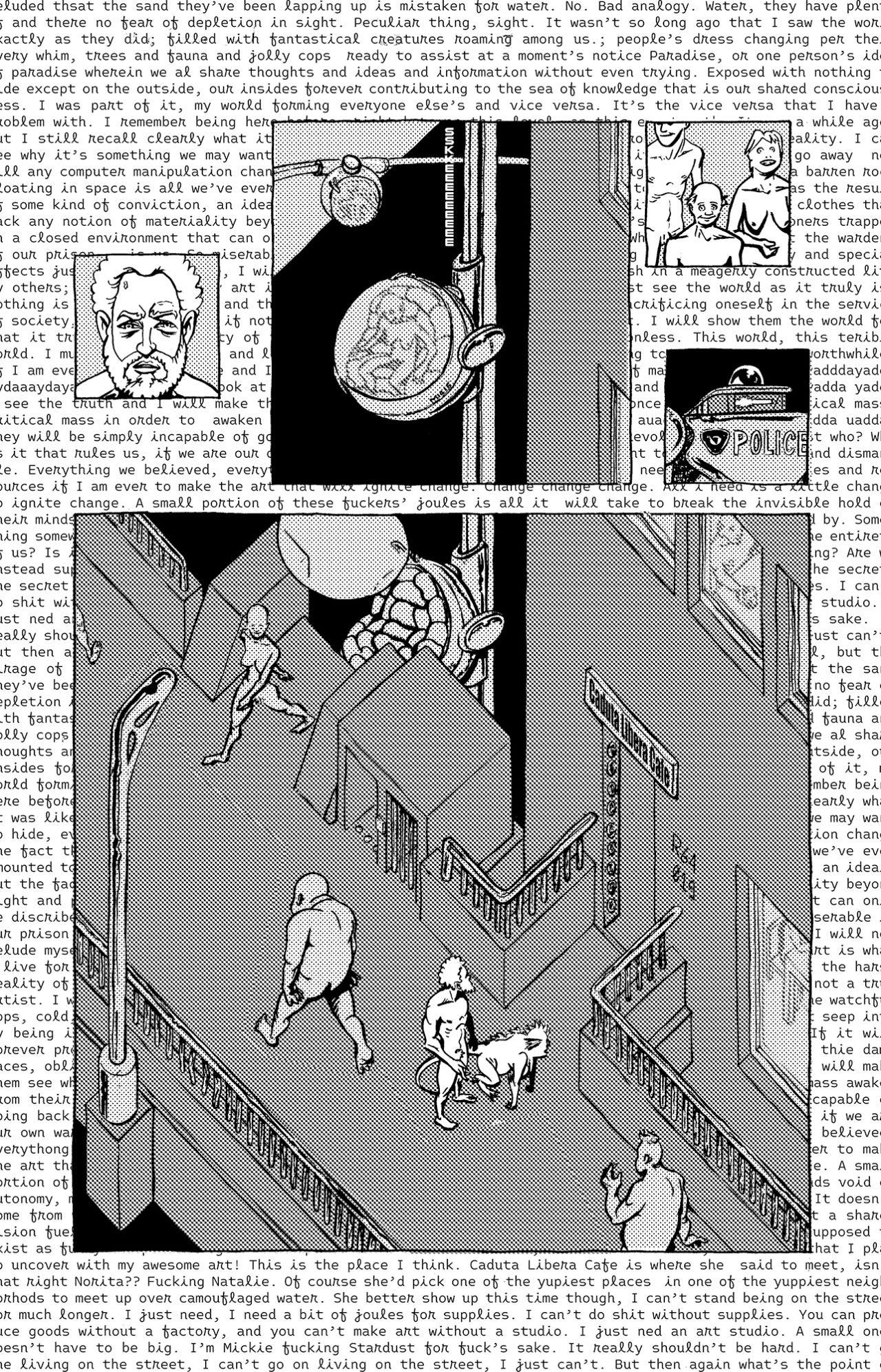 I lied; I couldn't let it go. Cut out the two figures that were bothering me the most and I think the page is now much better. Will probably redraw them and paste directly onto the original pages (because I hate having sub-par originals).

Tried the thing I wanted to do with the gutters and I think it works (Although, what is included right now is just some preliminary text for a quick mockup, just to get a sense of the look of the thing). You get a real train-of-thought vibe, like this character's mind is really at work and he just can't shut it off.

My initial idea was to have it all handwritten instead of typed, like such: 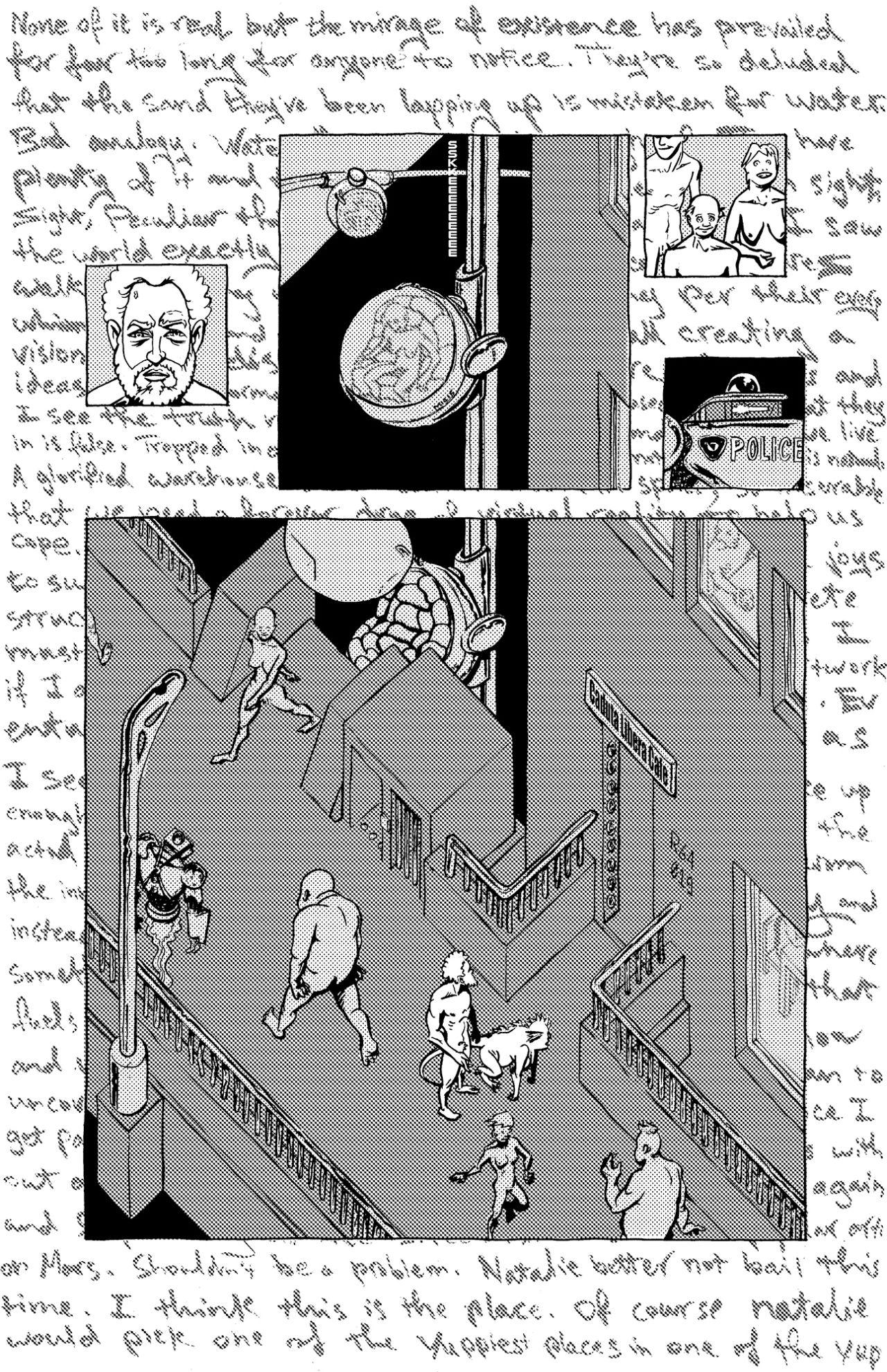 Looking at both of them now though, I can't quite decide which one I like better. 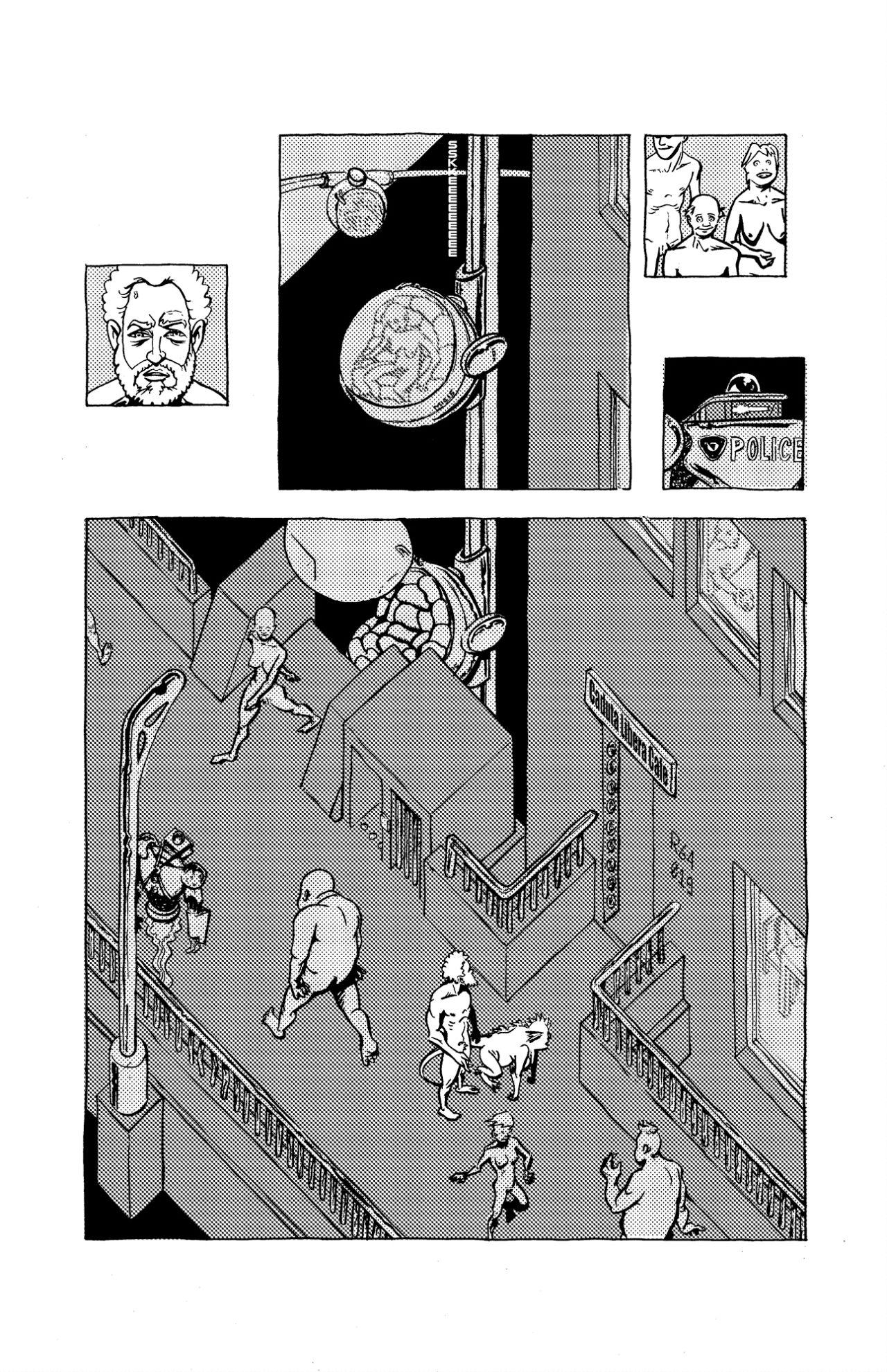 There's an exhausting idea I'd like to try out with the gutters, but that may have to wait till Monday. A bunch of house-maintenance stuff to do this weekend. 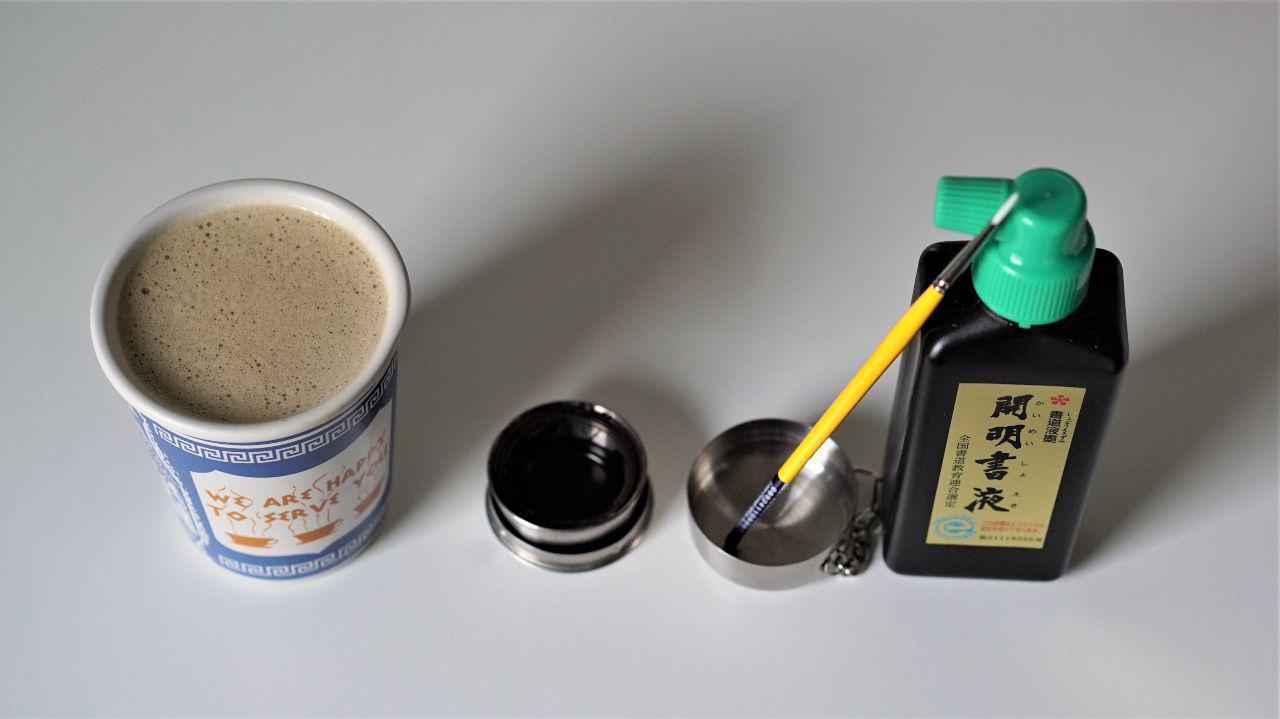 Coffee is shaken, not stirred. That's what creates the foamy top, together with a tablespoon of coconut oil and a dash of goat's milk (I used to take my coffee extra sweet for years, but I've been off sugar for two months now and the coconut oil—although nowhere nearly as sweet as sugar—cuts through the bitterness some).

It's time to ink today. For which I'll be using a series 795 Round Loew-Cornell #2 brush for the first time (I usually use Trekell's Kolinsky Sable Round 7000 series in a size #3 for brush work, Zebra's G nib for, uh, nib work, and Staedtler pigment liners—mostly 0.3 and 0.1—for straightforward “cleanline” styles).

(Which should not be confused with the European “Ligne Claire” approach, which still offers a degree of line-weight variation. That's what the Loew-Cornell is for, it's what Chris Ware uses. The Kolinsky #3 is what Eisner used, and offers thicker strokes. G Nibs are used by Naoki Urasawa (I think?), and pigment liners are used by Mignola.)

Excited to see what the Loew-Cornell will do. 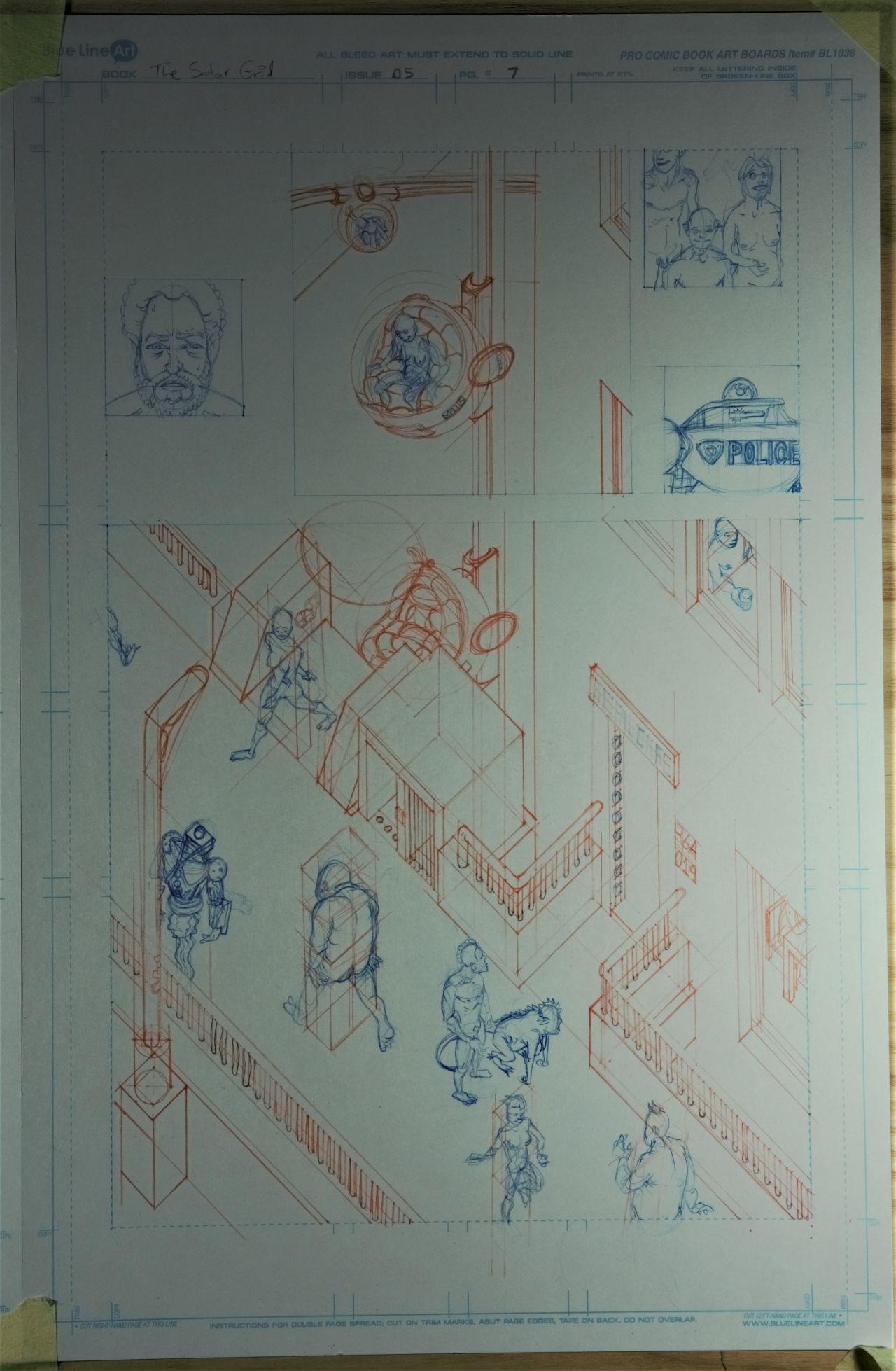 My good friends at the Boulder Weekly have decided to publish my demented vision of the future and use my art on their cover this week. 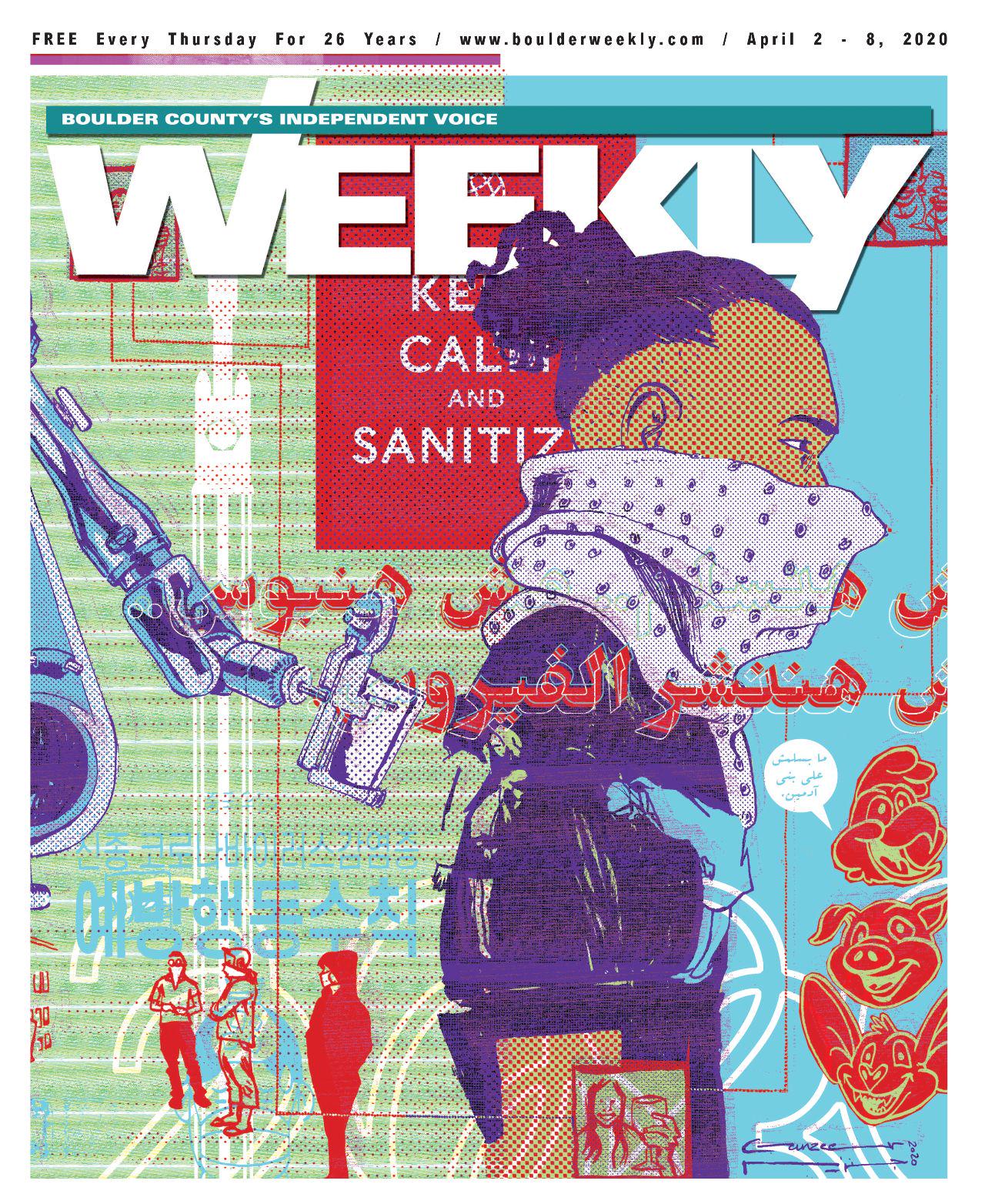 Still working on that cursed “isometric” page in THE SOLAR GRID. It's coming along rather well (albeit a little slower than a “standard” comix pages). 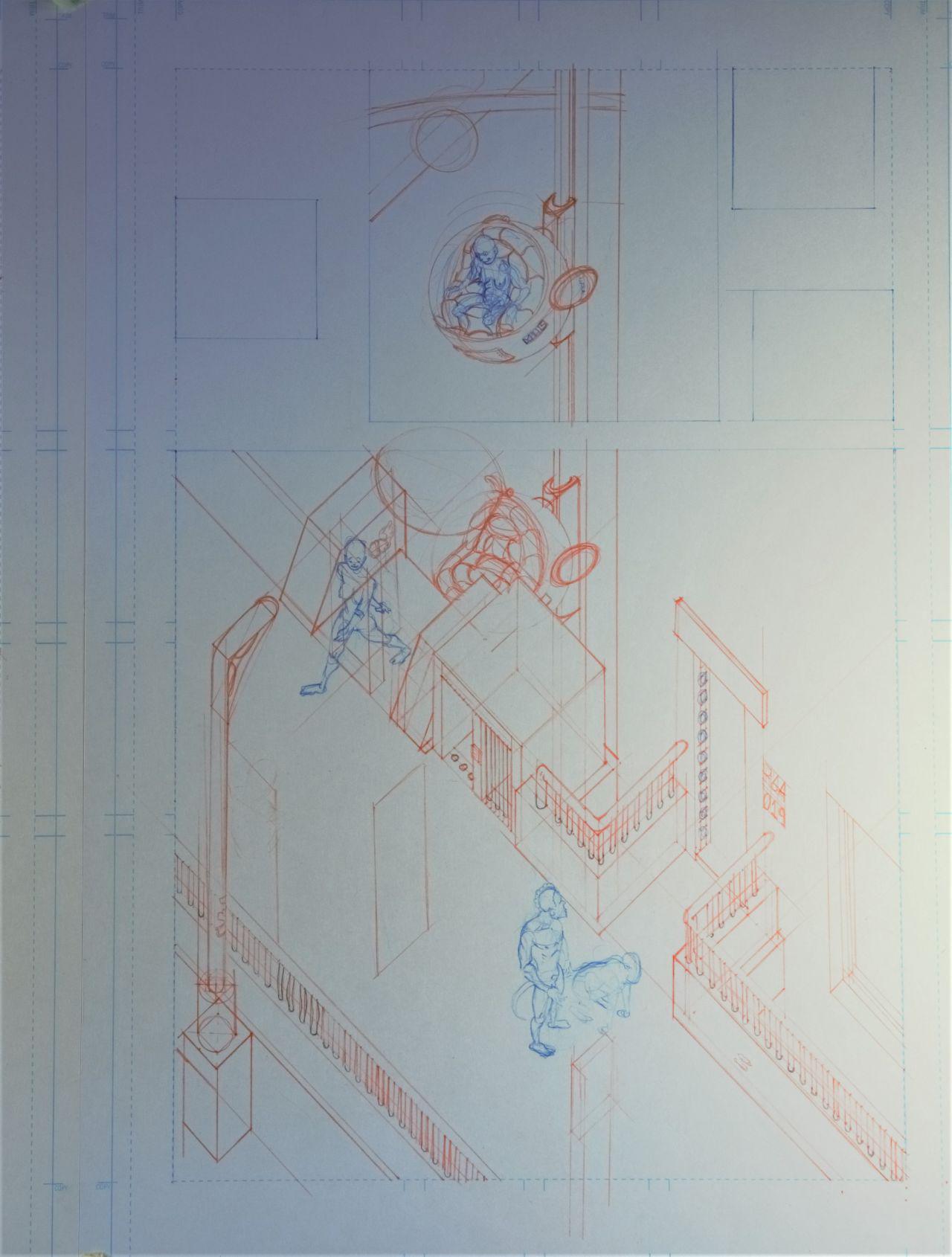 Elsewhere in the back of my mind, I'm thinking of the weird surrealist art that used to adorn many science fiction paperbacks of the 60's and 70's, and that maybe, just maaaaaybe... I might like to do something along those lines for THE SOLAR GRID once complete and collected.

Not a good day for migraines, not when I'm drawing something that requires a high degree of precision. 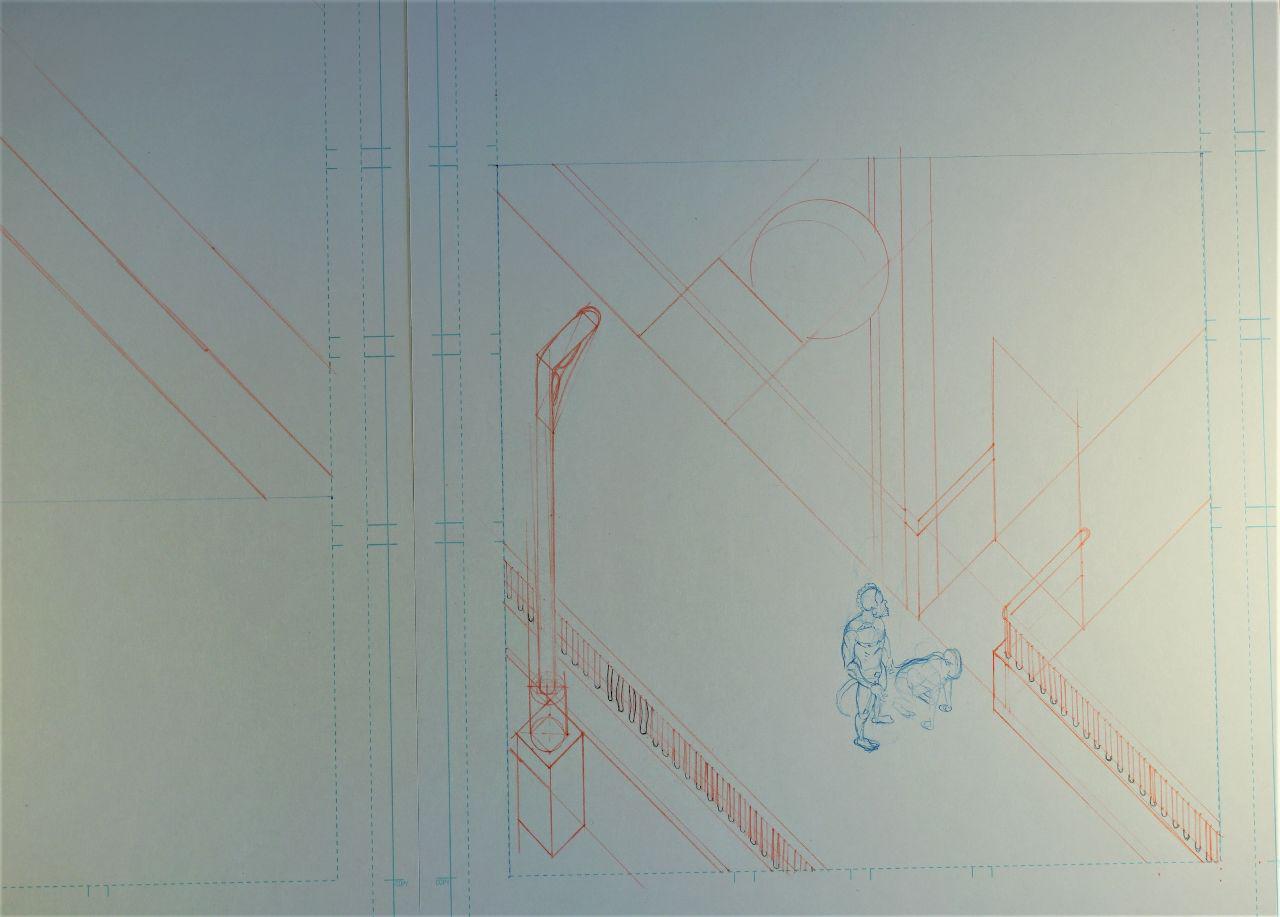 This kind of isometric perspective that is typical in the work of Chris Ware doesn't come naturally to me, mainly because... well, I hate rulers. Not as much as, say, Paul Pope (who draws buildings and stairwells and cars with the same organic brush-strokey energy seen in his figures), but still; this kind of approach is all rulers.

To be fair, a facet of all my work is probably the tension between “accuracy” and its complete opposite.

Good things can come out of migraines btw. There's this page in Chapter 1 that I distinctly recall being hit with a migraine attack the day I was working on it. 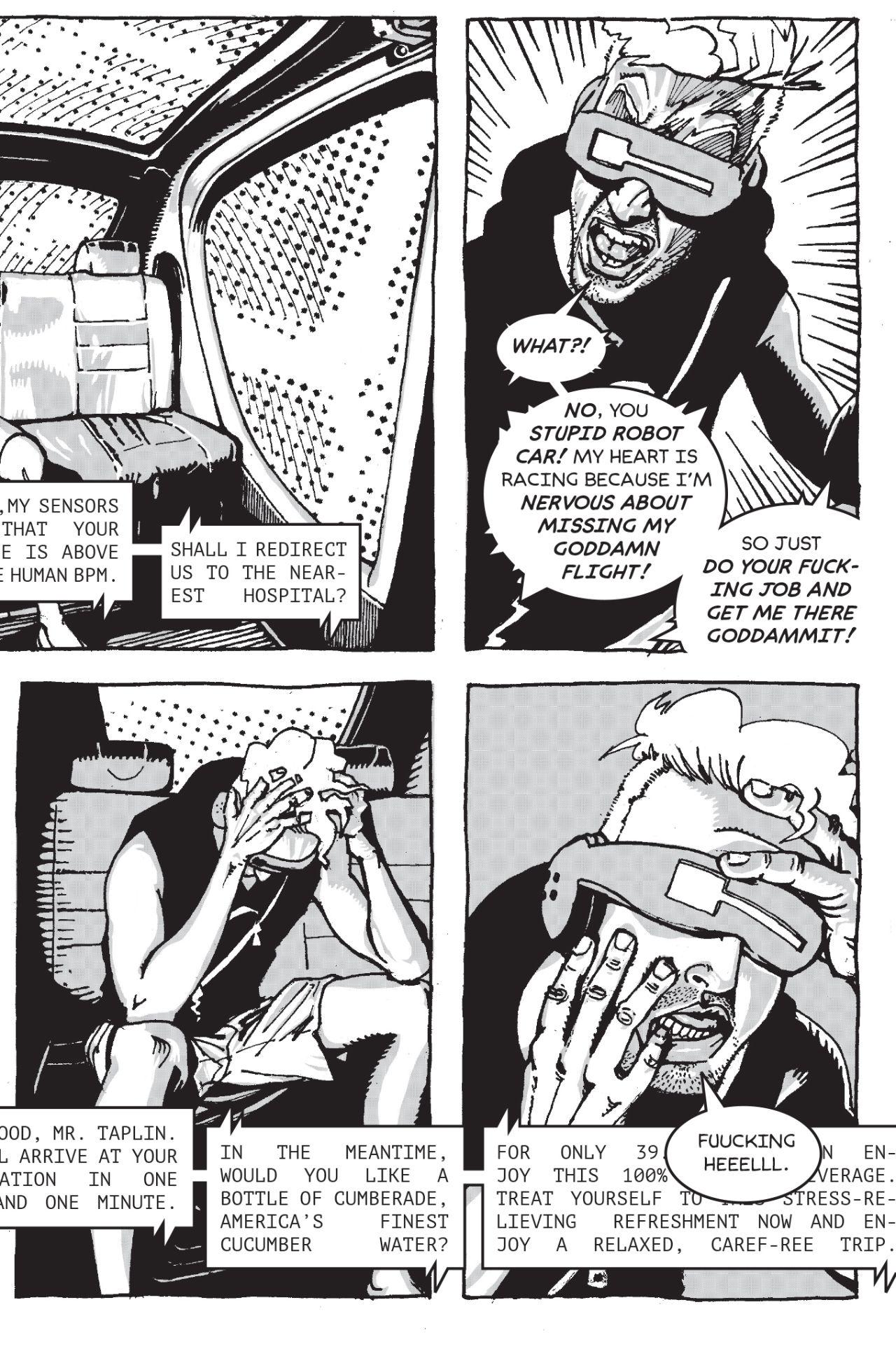 In fact, that particular page wasn't even planned at all. I only included it because of the attack. And it's probably the only bit in the entire chapter infused with a degree of humor. ¯_(ツ)_/¯

I was living in LA at the time, which, shit already feels like a lifetime ago. 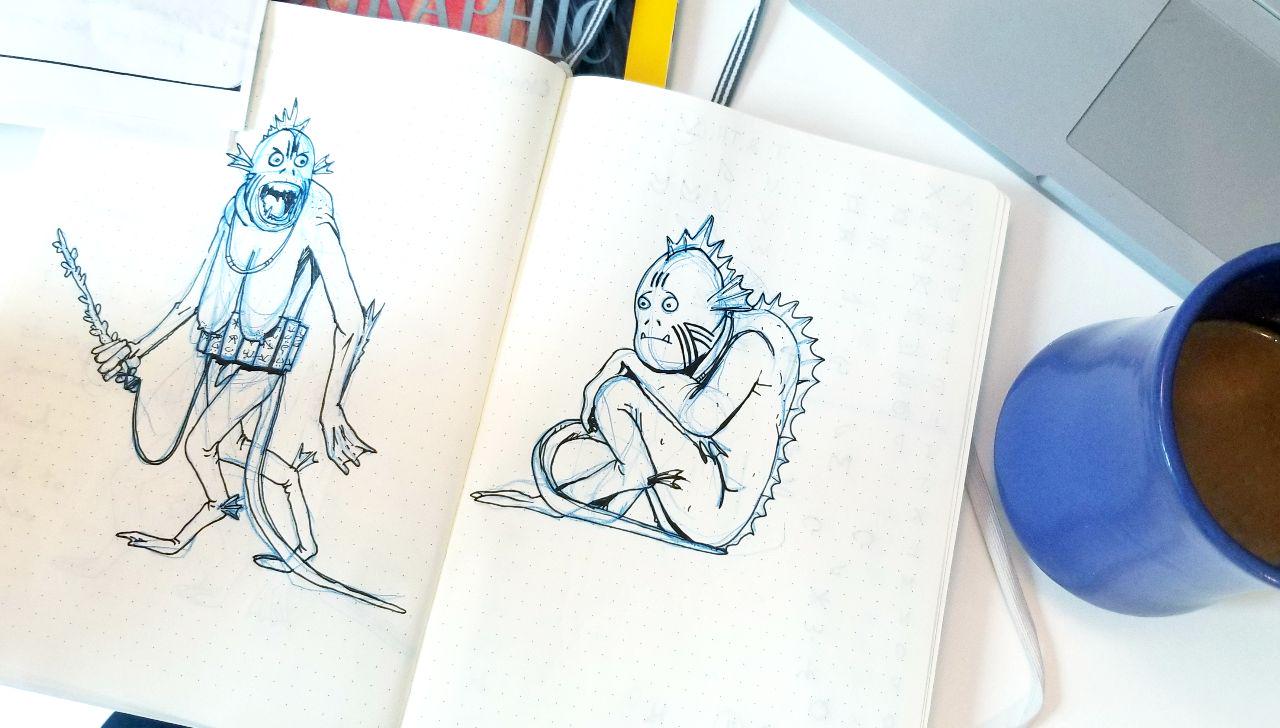 Yes, I finally introduce the aliens.

Not sure anyone reading THE SOLAR GRID was expecting aliens.

It is 9:43 am in Houston and I've been up for at least 6 hours. Two-three of which I spent trying and failing to fall back asleep. My mind is awake, but my bodily functions are very much dead. Today will be a sluggish day at the drawing table.

Still, I am foolishly determined to finish a full page of comix today, inking and all.

The air is pleasantly cool and the blue jays populating the palm trees outside do not sound as pretty as they look.

The spread above is from my sketchbook where I've revisited the design of the alien(s) I'm about to introduce in the actual comix pages. If you look very closely at the page on the right hand side, you can probably make out some of the alphabet I devised for their language.

Don't really have the headspace to figure out how to develop it into a font, so will have to hand letter that shit.

There is a panel—a single panel—in THE SOLAR GRID that has been the source of great agony for me. Since starting the book to this very day, I've only ever had to redraw a panel a handful of times. I'm usually good from the first go, but this panel here... it's been killing me. And if I show it to you now, there's no way you would possibly think a panel this simple could have possibly been reached by a jagged road of pain and suffering. 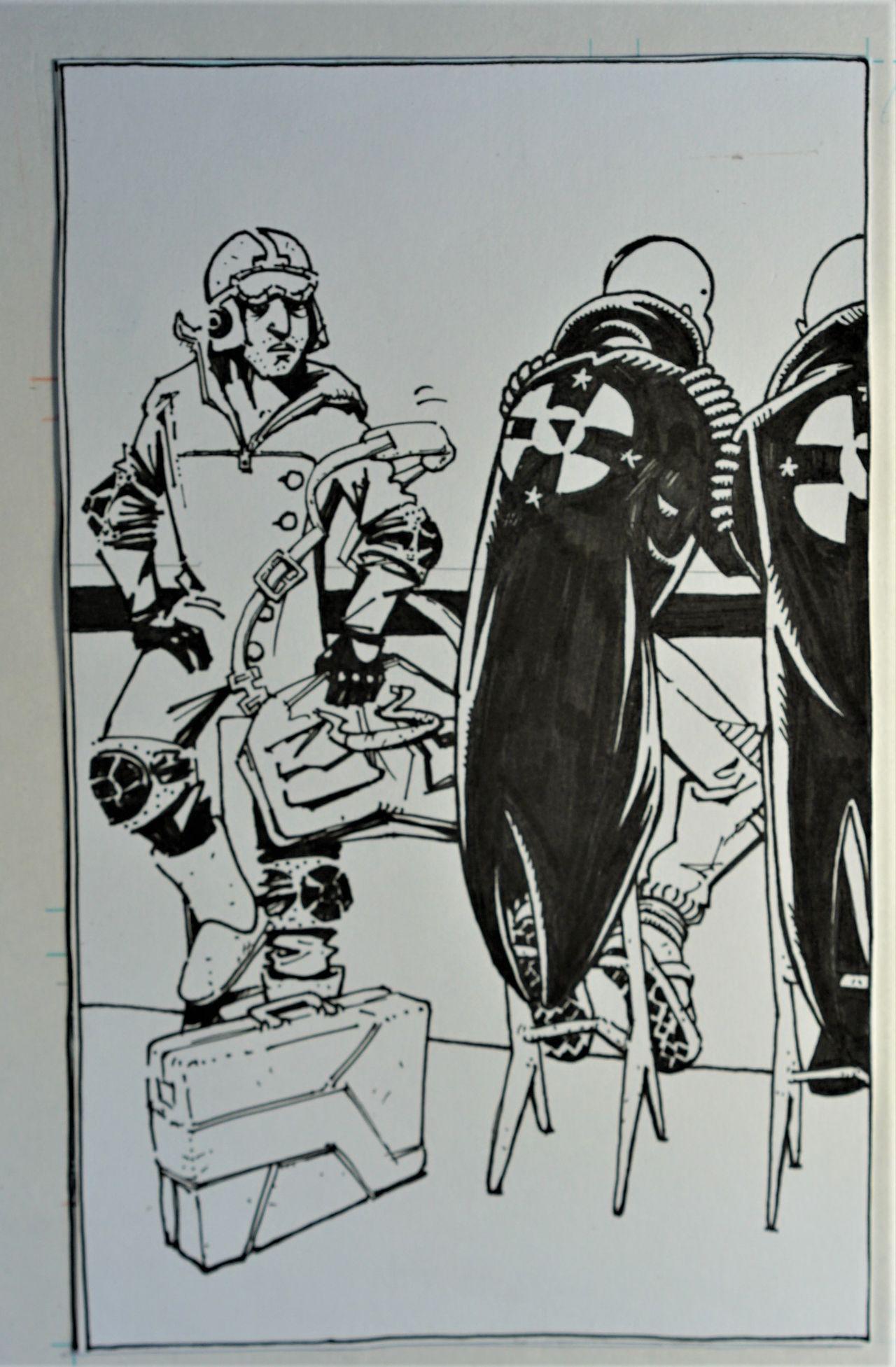 You see what I mean?

The reason being: well I hadn't adequately thought about which bits I really needed to focus on. I knew that I needed to depict the exchange of bags. That was the primary “action” taking place in the panel, but I also wanted to depict some more information. Chiefly, the logos on the back of those trench-coats, and also... the trench-coats themselves. The outfits worn by those two figures needed to be seen in clear juxtaposition to the less stylish, more downtrodden attire worn by the figure on the left (Falak). For the longest time, I was convinced we needed to see Falak from the rear just like the two other guys, to emphasize that—unlike them—his outfit featured no logo, and instead just the word “Earth” haphazardly scrawled on the back of his suit. However, any attempt at depicting him from behind made the the transaction of bags seem less obvious. Which was our primary reason for having this panel at all, remember?

Can't let the secondary purpose get in the way of the primary purpose. Especially given that we already see Falak's backside a couple chapters prior. 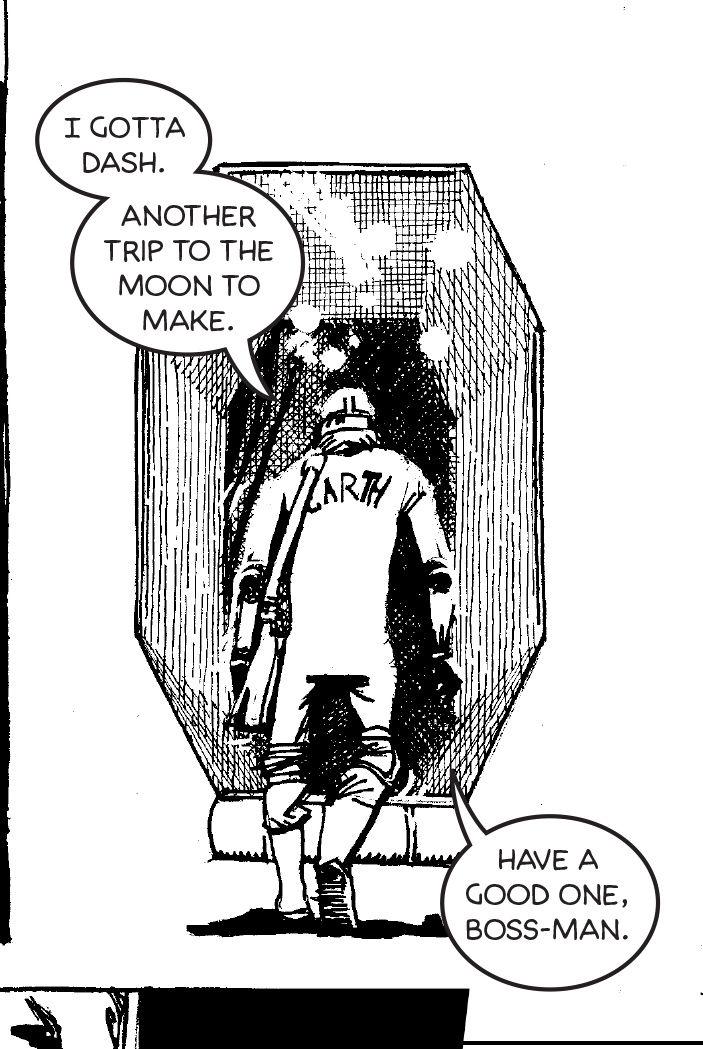 At the end of the day, each line we put onto the page is an additional piece of information that is relayed to the reader, and it's important to be conscientious about what information we are putting out, especially with such a very finite amount of space to depict information to begin with.

I also wanted to depict that this transaction was taking place in a bar. Now, when you look at the resulting panel, you get that they're in a bar. But, it doesn't really capture the “baryness” of a bar, does it? There's no hustle and bustle, there's no backdrop with a bajillion types of liquour, no bartenders working their magic even, and for the longest time I was greedy about wanting to fit aaaaaalll that in. And in my attempts to do just that, I just failed really miserably. 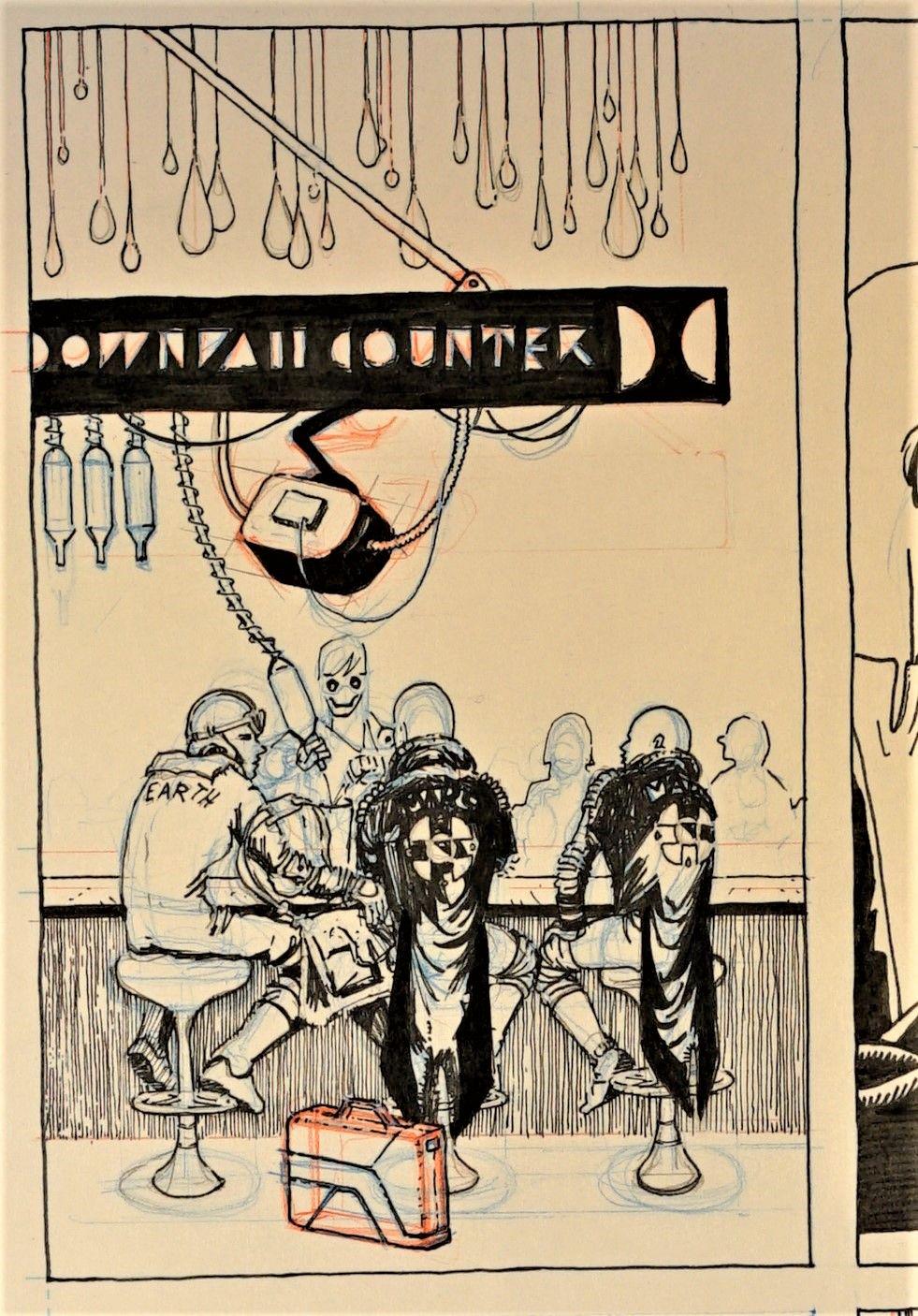 This one is such a mess because the hierarchy of relevant information is so jacked up, that neither the primary, secondary, or tertiary purposes at all make it through. We can hardly tell that there's a transaction of bags, we can't really get a good look at the outfits or logos, and yes, we can see they're sat at a bar (that's probably the one thing we really get out of the panel in this case), but it's so zoomed out that its hard to tell what the point of focus ought to be. Is it the teardrop-shaped chandelier things? The hardly eligible signage? The pull-down liquor bottles?

The panel I ended up with does the job of communicating that we're at a bar adequately enough, especially when you take into consideration the context within which the panel exists: 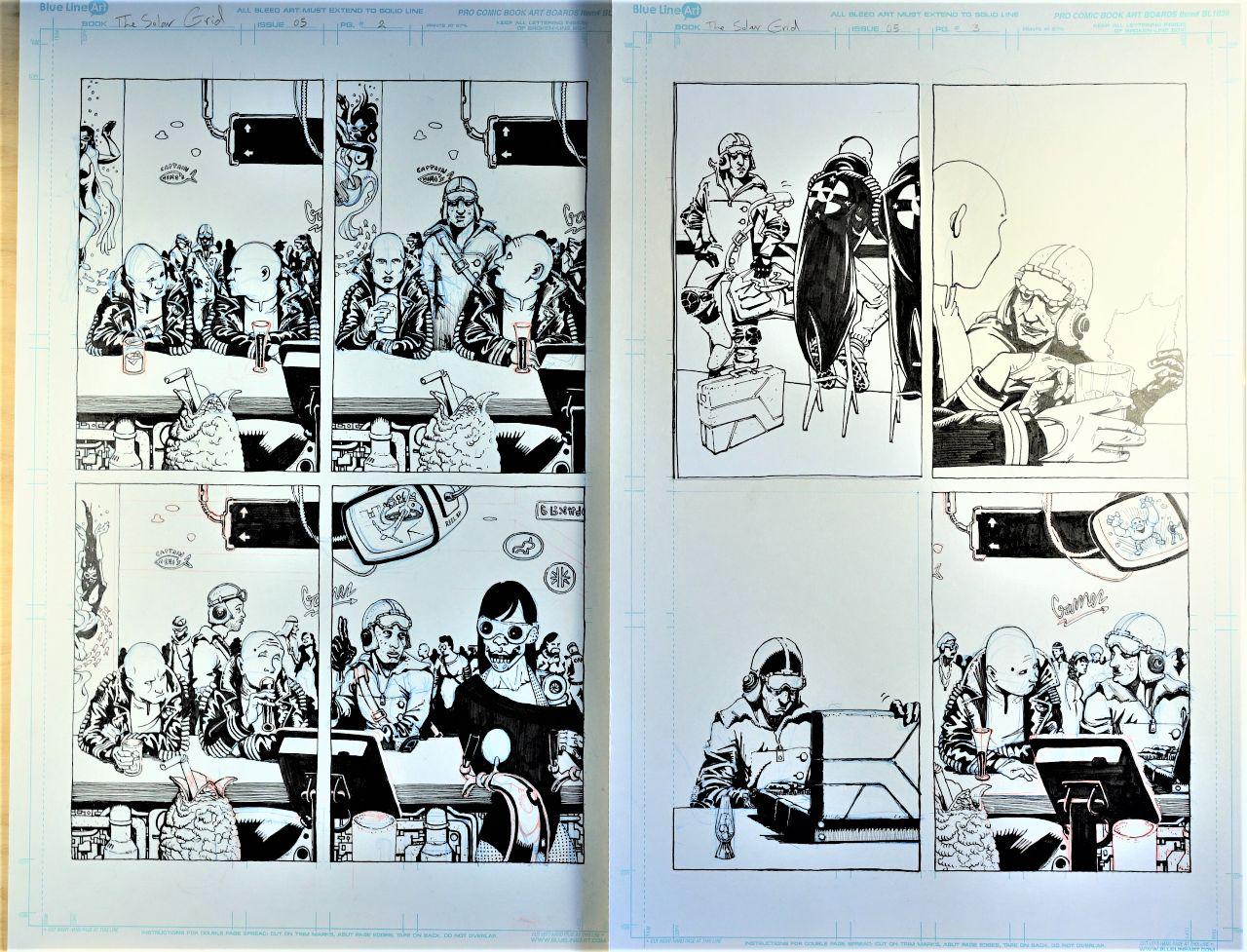 It's sometimes easy to forget that a comix panel doesn't exist in a vacuum. It exists in the context of not just the single page, but actually within the context of the double-page spread. And in this particular case, we can clearly get a sense of the bar and it's rowdy atmosphere without needing to jam it all in that one particular panel.

The page is the unit, not the panel.

Sometimes I just need to remind myself.

Another thing the struggle around this panel brought to the forefront for me was the importance of visual “cyphers”. I'll get to that in a future #ComixEngine.